I wonder about lots of things –  will it be too wet to ride to Whitstable this weekend? Do I have time to make brown bread and raspberry ice cream? I’ve also been thinking about which cheese rinds should be eaten. My approach to date has been pretty much if it is natural and not as hard as woodchips then I will try chewing it. This isn’t a bad approach but it has resulted in some pretty awful mouthfuls.

An article in Slashfood suggested that eating the rind is just as important as the smell –  it draws a stronger picture of the cheese in your memory through texture and taste.  I like this idea. And although it is very much a personal choice, there tends to be  a fairly general view that if its natural, it is at least potentially edible.

One of  the best discussions of this topic is on the old blog of Murray’s Cheese shop in New York.  The people at Murray’s cheese have also  put together a great map that categorises different types of cheese by their rind (and kindly let me include it below): 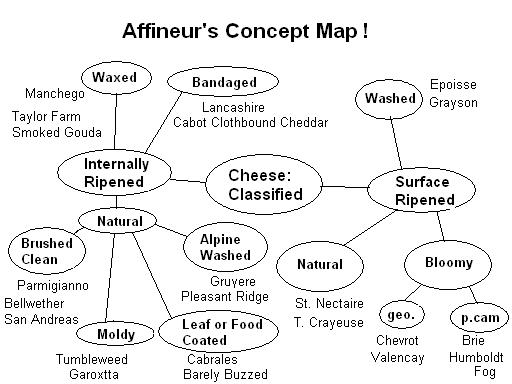 In some ways it’s odd – wanting to eat mould seems counter intuitive but I can’t imagine not eating the chewy rinds of young, soft white mould cheeses, such as camembert or brie. I’m equally partial to the outsides of washed-rind cheeses, as although they can get quite tough, so much of their character is bound up in the rind that is seems wrong to separate them.

The main ones that less palatable are the old, leathery rinds from aged air-dried hard cheeses, such as parmesan. Although it unlikely to be bad for you, these have been open to the elements and collect dust and all sorts of other natural bacteria. Even if they’re not eaten on their own they don’t all have to be thrown away; there are a range of recipes that call for rinds, especially from parmesan – such as minestrone or toasted parmesan rinds.

In between these extremes are cheeses with all sorts of natural rinds, including nettle leaves and ash. I was trying some Gorwydd Caerphilly at Neals Yard Dairy the other week and learnt that the rind is central to the taste. The Gorwydd has three main textures and levels of dryness that results from the inward drying as it ages, just like tree rings. Removing the outer layer would mean losing one level of taste and texture.

4 thoughts on “Eating the rind?”