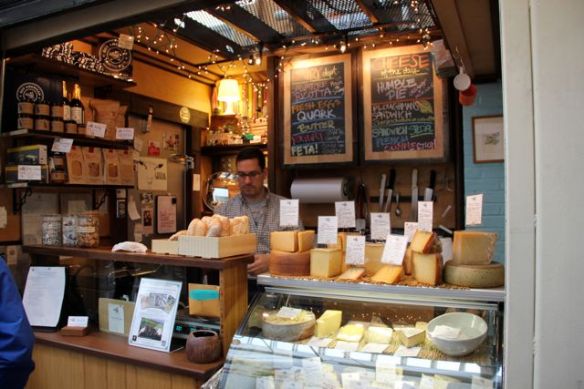 Ok. so it was a little while ago now, but as part of our travels we went to New York and I wanted to tell you about the cheese.

Going to cheese mongers when you’re on holiday is a form of torture in some ways. There are rows of these amazing cheeses, all begging to be tried but I have nowhere to keep any of them, so have to somehow limit myself to buying just one cheese per store. It is almost impossible!

The first stop was Saxelby Cheese. If  you’re walking down Essex street from East village, it would be quite easy to miss the doors into the Essex Street Market. We got half way down the next block before I realised we’d somehow not found a cheese shop.

Once you make it inside the market however, you find a crammed world of edible and imbibable substances, too many to try in one visit. At the southern end is Saxelby Cheese. This tiny store, the brain child of Ann Saxelby is exclusively devoted to artisan cheeses from the North Eastern states of the USA; states that are full  of small cheese makers and this store provides a way to try lots of them.

I was really excited about trying cheeses from this region. As you’ve probably worked out by now, I’m very partial to a good washed rind cheese, and I tried an amazing cheese day called Humble Pie. Produced in Vermont by Woodcock Farm, my small wedge was oozing from the moment it was removed from its wrapping, sticking to my fingers and coating the inside of my mouth. Being brine-washed, with smatters of mould, it has a reasonable strong smell but it is creamy and smooth to taste. I wish we had more.

The second visit was to Lucy’s Whey and their store inside the Chelsea Markets. Another specialist in American cheeses, it was packed on the Saturday we visited with people buying cheese as well as the toasted cheese sandwiches. It was blue cheese for me today. After trying a few options, I settled on a Jasper Hill blue. It was lovely and salty, with a slightly dry texture (although thining back, I;m not sure if this was primarily relative to some of the creamier blues I tried). It turned out to be a bit of a mistake going on the weekend, as there wasn’t much of a chance to ask questions but it was still good to make it there. Another good reason is that the Chelsea Markets are right next to the Highline Park – an restored raised rail line that is now a park that weaves thgrough the new York skyline. A perfect picnic stop after buying your cheese.

One thought on “A small wedge of New York cheese”