So, this is my current cheese – a blue. The cheese started out its life  at my cheese course last month, which was run by the Yarner Trust in Welcombe, North Devon.  We made some ricotta, a washed curds blue and a crottin. Having mostly been making cheese on my own, it was so helpful to to speak to other cheese makers – a combination of reinforcing what I knew, learning new things and hearing about other people’s mistakes and mishaps. Plus we got to discover a new pub. The Old Smithy makes an goats cheese and chorizo burger that has inspired me to start a new series of posts dedicated solely to high quality cheese burgers – so more about this burger another time.

Blue making is really satisfying. After it has been weighed down, salted and dried, you get to spike it with a meat skewer, leave it for a week and spike it again. Then the mould grows. It’s been in our cheese fridge for just over 30 days.

I’ve been turning it every 1-3 days but I’m not sure it had been getting quite enough oxygen –  the photo above is abut 2 weeks ago and I expected a bit more blue and a bit less white. Since then, not much more blue has emerged. Without really thinking, I put the cheese into my esky where I’d been previously maturing my Camembert and didn’t disinfect it in-between. I suspect a bit of pencillum candidium  (the bacteria used to develop the white mould in Camembert) may have infected the blue. I don’t think that’s too bad though but don’t really know.  I’m going to wrap it in foil in a few days, put it in the fridge and keep on waiting.

The other cheese we made was supposed to be a crottin-style cheese. During the ageing process I instead managed to make a hard (otherwise known as overly dried) lump covered  in scary looking orange mould. It took a number of scrapings to turn the outside rind into more innocuous-looking white and blue blotches. I decided to try it at about 4 weeks old.  After scratching away the surface, it wasn’t so bad  – a bit like an a leathery and odd romano or parmesan, but without the depth of flavour. It’s still in my fridge, so I might try grating some on pasta. 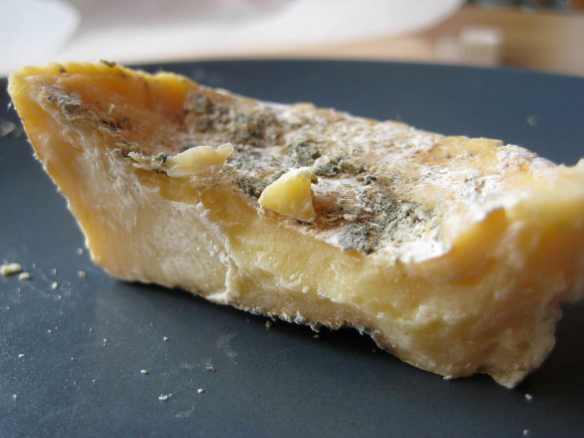